A Post on the Ploughshares Blog: Where Food and Literature Collide

I am pleased to share my recent post from the blog of the U.S. literary magazine Ploughshares: "Woolf at the Table: Good Dinner, Good Talk." The post talks about the sumptuous description of food in Virginia Woolf's work and her interest in culinary and gastronomic matters. So if you are interested in the intersection of food and literature, you will, I hope, like it.
Posted by Angshuman Das at 7:55 AM 51 comments: Links to this post 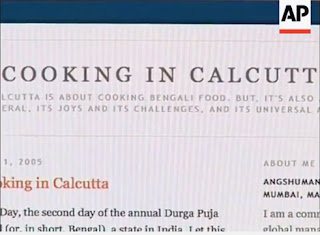 It was my daughter who did the discovery recently -- well, a couple of months ago. My 10-year-old, who is an expert in Googling, found out a YouTube video of an Australian television story on food bloggers, including me. This is a video I had been curious about.

I became a part of the story when the journalist who was shooting it in Mumbai interviewed me when I lived in Mumbai. The story took shape, I assume, mostly in Mumbai, but I never again heard from the journalist. Over time, I just let it go, pushing it into oblivion.

So I was surprised when my daughter, Trisha, turned up the video while Googling her dad's name. I feature in the video in a pink t-shirt, rolling my eyes while speaking in a cafe, where the interview took place. If you are interested, here is the video, Food lovers post gourmet blogs on internet.

Posted by Angshuman Das at 7:35 AM 7 comments: Links to this post

Angshuman Das
I am a marketing communications professional at a global IT company.