A vegetable both plain and exotic 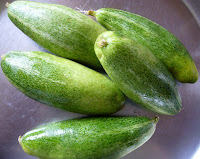 I am on vacation in Calcutta, my home town, and I can’t find a topic better than parwal, or pointed gourd. For this vegetable is native to this part of India. While this is a familiar vegetable for people in eastern India, it’s relatively exotic in other regions, like Maharashtra, where it is four times as expensive as in Bengal (an eastern state). And in the United States, it sells for $7 a pound!

Parwal’s Latin name is Trichosanthes dioica. Called parwal in Hindi and potol in Assamese, Oriya, and Bengali, it is widely cultivated in the eastern part of India, particularly in Orissa, Bengal, Assam, and Bihar, and parts of Uttar Pradesh.

It is a vine plant, similar to cucumber and squash, though unlike those it is perennial. The fruits are green, mostly with white stripes; the size can vary from small and round to thick and long — 2 to 6 inches.

It is used as ingredients of stew, curry, or eaten fried and as “dorma” with stuffing. Pointed gourd is also converted to a sweetmeat in Bengal.

For more on the possibilities of parwal, please be patient. This post is merely a prelude. For what you can do with parwal, watch out for another post. I will need to ask my mother for help on that.
Posted by Angshuman Das at 8:50 PM 14 comments: Links to this post

Let us make an omelet

I love egg in all its forms: omelets, and fried, boiled, and poached egg. But, I have a special weakness for omelets.

Omelets come in varied forms, too – what infinite variety egg provides! There is the classic French-style omelet, folded, with stuffing inside – cheese, sautéed vegetables, chicken, fish, or pretty much anything that tastes good. And there is the frittata. But, the homiest – at least for me – is the Bengali-style omelet, which is a cross between the French style and the frittata style.

The Bengali style involves mustard oil, which adds a strong, distinctive flavor. (Unlike extra-virgin olive oil, mustard oil doesn’t lose much flavor even on heating.) The omelet has chopped onion, green chilly, and tomato – sometimes chopped cilantro, too – along with seasoning, all stirred into the egg and whisked vigorously. The frothy mixture is then poured into a pan lined with heated mustard oil. The omelet is cooked in the usual way (tilting the pan and lifting the edge of the omelet to let uncooked egg run underneath) or flipped; it is then folded.

The result is a fluffy, tangy, strongly flavored breakfast – or lunch accompaniment. This is no gourmet stuff; roadside eateries, even vendors on the sidewalk armed with nothing but a “chulha” or kerosene stove, make the omelet perfectly. (Egg is egalitarian; that’s one more reason I love it.) Try making this omelet!
Posted by Angshuman Das at 10:40 PM 2 comments: Links to this post

Angshuman Das
I am a marketing communications professional at a global IT company.